Media organizations have given up on their legal efforts to force videos and photos of Dawn Brancheau’s death into the public domain. Here is a report from the Orlando Sentinel, one of the media outlets seeking access to the material:

The Orlando Sentinel and other media outlets have abandoned an effort to ensure public access to video recordings and photographs documenting the killing of a SeaWorld Orlando trainer by one of the park’s killer whales.

The move is a victory for SeaWorld and the family of the late Dawn Brancheau. The two parties have been battling in court to block any release of the images capturing the Feb. 24 tragedy, in which a 6-ton killer whale named Tilikum pulled Brancheau into his tank by her hair and drowned her in a violent episode in front of some park guests.

The court dispute revolved primarily around images recorded by SeaWorld surveillance cameras — including one capturing an underwater view into Tilikum’s tank and another mounted atop the park’s 400-foot-tall Sky Tower — which SeaWorld turned over to the Orange County Sheriff’s Office as part of that agency’s investigation into Brancheau’s death.

A lawyer for the Sentinel’s parent company said Thursday that representatives for SeaWorld and the Brancheau family were unwilling to accept a settlement offer in which news organizations would have agreed not to publish any of the images or air the video in exchange for the right to have their reporters inspect the materials.

The only reason to ever make any of this sort of material publicly available is if it helps answer questions about what happened, and can help prevent a similar tragedy. Anything else is just prurience, and voyeurism of the sickest kind. I have watched a person die on video. In that case the video was the only way to understand why he died. It was still an intensely harrowing, and painful experience (which is why I haven’t supplied the link to the video). 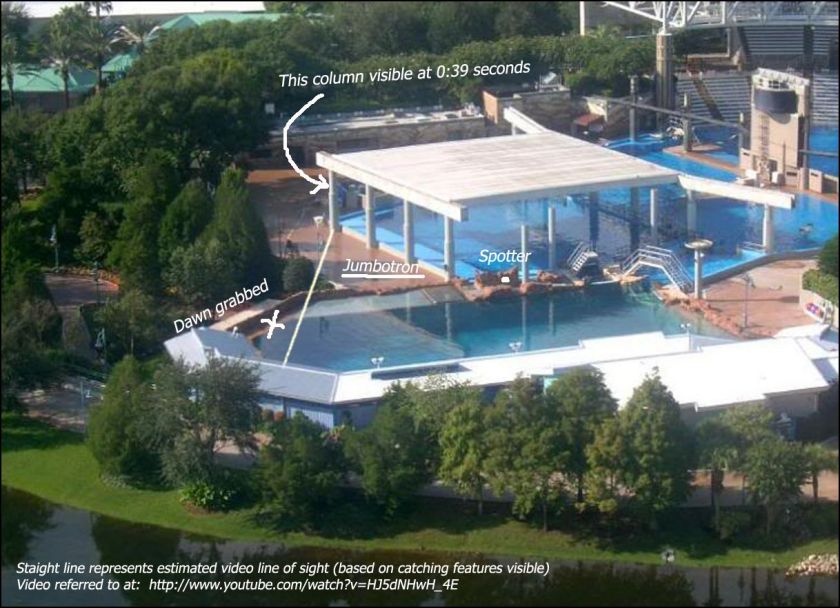 I am not sure what photos are involved, but if they depict scenes from the aftermath, when efforts to resuscitate Dawn were being made, and when she was cut out of her wetsuit, then I don’t think they come close to meeting this standard.

As for the video, there are two videos. One was shot from a camera on the SeaWorld Orlando Sky Tower, which is 400-feet high. The camera was trained on G pool where Dawn was fighting for her life after the pool alarm sounded. From what I am told, you can’t really see anything in this video, so it has no real probative value.

The second video was shot from a camera which gives an underwater view of G pool. It shows a splash, and then Tilikum and Dawn underwater. This is the key video. It shows Tilikum killing Dawn. And while it does not show Tilikum grabbing Dawn and pulling her into the pool (which would probably be the most important sequence in terms of understanding the tragedy, and what can be learned), it does show how he behaved in the water with her. It would show his affect, his energy, his responses (or lack thereof) to recall signals and to Dawn’s efforts to escape. It would be extremely painful to see, but it also clearly has probative value.You can get a sense of what is on that video from the summary contained in the Orange County Sheriff’s investigative report. 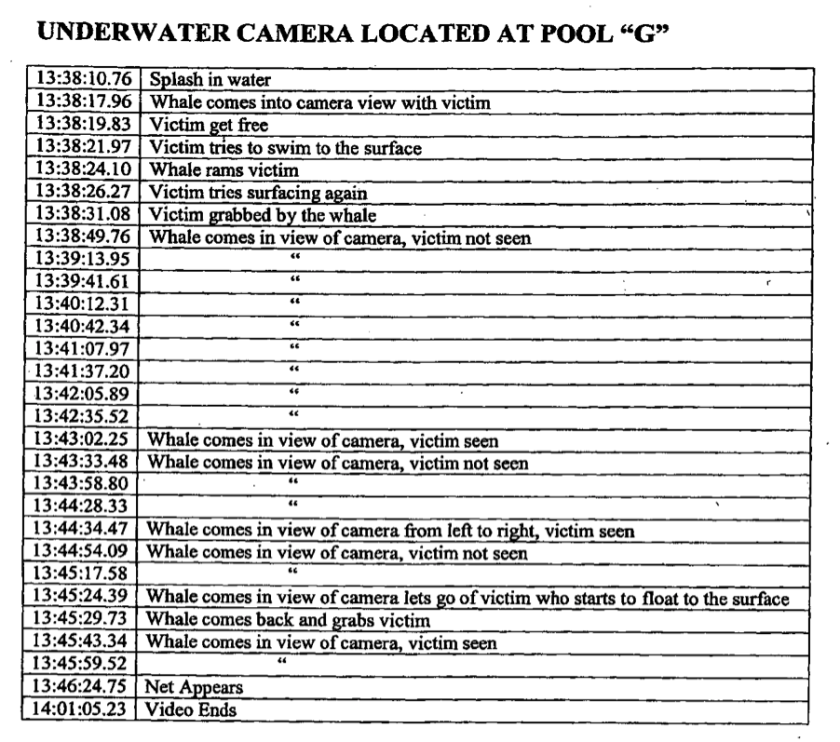 This summary is somewhat helpful, but obviously there is much more on the video, and ten outside experts viewing it would probably pick out a bunch of important and informative details.

So of all the material under dispute, this underwater camera video, to my mind, was the single piece of evidence for which public disclosure was most compelling. However, when I say public, I do not mean completely public–as in posted on YouTube where it would be a never-ending source of pain for Dawn’s friends and family, and a snuff film for the millions of sickos out there who get off on watching people die. I mean that it should be accessible to journalists and other responsible parties who would like to view it to learn whatever can be learned from a tragic event.

For this reason, the compromise that was proposed–in which journalists could view the video in private, but images from the video or the video itself would not be published or posted–was a sound compromise.

I can understand why SeaWorld would resist having the media pore over the video for a better understanding of what happened, and writing and airing more stories about the tragedy. But I am not sure why the Brancheau family resisted. They, more than anyone, should want to know exactly what happened and why (and feel as certain as they can be that they do in fact know what happened). Beyond that, I am sure they would like to do what they can to help make sure this never happens to anyone else’s child, sibling, or spouse. Letting outside experts and media access that video under strict conditions is one of the ways to do exactlty that.

39 thoughts on “Diary Of A Killer Whale: You Will Not Be Seeing Dawn Brancheau Die”