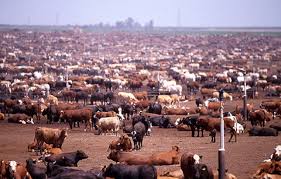 It seems pretty clear that factory-farmed meat is an abomination: both for the animal and for your health. So pushing that off your plate shouldn’t be that hard.

The real conundrum comes with the choice between no meat or organic, free-range meat (with its image of happy, frolicking, four-footers gamboling across a green nirvana–before the axe cleaves swiftly and painlessly).

Professor James McWilliams has been trying to make the case for vegetarianism, and he is growing weary with the toil. He has long been arguing that organic, free-range meat is not the panacea that morally-conscious meat-lovers believe. He has troubled himself to point out the environmental and health costs of this sort of meat as well (they are an order of magnitude less than the costs of factory-farmed meat, but still…). And he finds that instead of putting aside their steak knives, most people are more likely to stab him with them.

Where I break from most conscientious consumers is in my decision to avoid meat from free-range animals and other alternative sources. This position hasn’t won any popularity contests for me. My occasional critiques of free-range animal farming have led to, among other things, threats by a butcher to separate me from a particularly valued appendage as well as frequent charges that I’m a hired gun for agribusiness. Both concepts are equally difficult to contemplate.

My typical line of attack on free-range systems has been to illuminate hidden or unpublicized environmental and health-related pitfalls—some minor, others not so—in an attempt to persuade ethically-minded consumers that although free-range might be better than factory-farmed, it is not the panacea so many make it out to be. But this approach, for a wide variety of reasons (many of them my own fault), has been a bust.

Turns out every study has a counter-study; every assumption a counter-assumption; every bold statement an angry butcher waiting on the other end to castrate, well, my argument. It took me a while to figure this out, but drawing on scientific literature to tarnish the supposed purity of free-range farming is, when you get right down to it, counterproductive. Paradoxically, by critiquing free-range animal products with the weapons of science, I’ve possibly inspired more consumers to eat more free-range meat than to give it up. It’s a dispiriting thought at best.

Prof. McWilliams is not happy with this result. So he’s giving up. Or at least trying a new line of argument. That line is that even though free-range animals live happier lives, we are still, in the end, taking their lives.

But this position—the idea that free-range is automatically a responsible choice simply because it’s more attentive to animal welfare—is morally blurred. Better does not mean acceptable. Consumers of free-range meat who oppose factory farming on welfare grounds (however partial) cannot escape an inconvenient question: Doesn’t killing an animal we don’t need constitute the very thing that factory farming perpetuates—which is to say, harm?

This is a fine argument for anyone who stopped eating meat after they saw Babe. They are morally opposed to killing animals when other foods, like rice and beans, are abundantly available (or at least that is my story). The problem is that I don’t think Professor McWilliams is going to win many new converts with it. No one who happily tucks into free-range meat these days is unaware that the animal on their plate has been, um, killed. And they are okay with that.

Sadly, Professor McWilliams will have to go back to slogging away in the trenches of environmental and health-based argument. If people really understood the true cost of a hamburger (even a delicious, happy, free-range hamburger), that would affect their choices.

Or, maybe Professor McWilliams should just skip that part and instead turn his energies to getting the market to price hamburger according to its full ($200) cost. That would lead to a real revolution in meat-eating.

For those who are morally uncomfortable with the idea of killing animals for meat, but haven’t yet been able to stop eating it, I highly recommend listening to the views of Jonathan Safran Foer.

One thought on “The Meat Maze”