Ingrid Visser of the Orca Reasearch Trust, has spent twenty years studying and observing orcas in the wild. 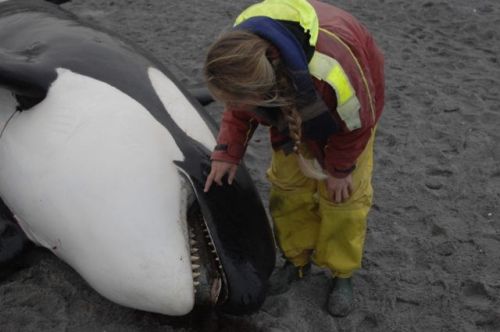 And she was responsible for taking this highly detailed picture of Nakai’s wound: 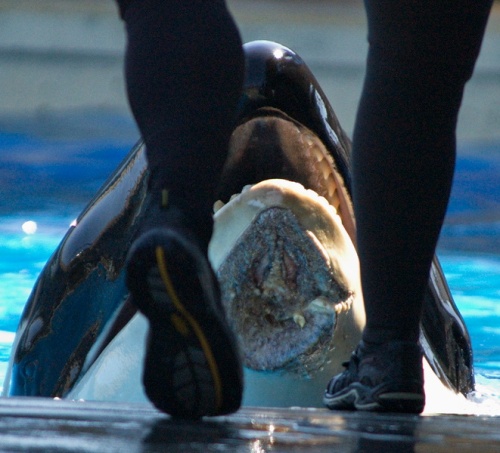 Perhaps the most important detail in this picture is the puncture marks which appear on the lower right margin of the wound, opening up the possibility that Nakai’s wound was caused by a bite from another orca, and not a collision with some part of the pool, as SeaWorld has suggested.

Now Visser has sent me a more detailed analysis of Nakai’s wound. Here it is:

The recent wound on the captive orca Nakai remains an enigma as to how it occurred.  When I first viewed (unreleased) photographs taken a week after the graphic injury, I was of the opinion that it was unlikely to have been inflicted by other orca, based on the fact that no orca teeth marks were clearly visible in the photos and the very ‘clean’ edges to the wound.

Regardless of the source of the wound, I didn’t buy the story from SeaWorld that Nakai had ‘come into contact with the pool’ (AP, Sept 28th 2012, press release), as to me such wording implied a light brush past, or perhaps at worst a bump into the side of the tank.  Clearly such a striking wound wasn’t from a light brush or even a ‘bump’.

Therefore, based on the photos available, I was of the opinion that this traumatic injury had been caused by severe contact with a sharp edge.  This took into account the very ‘clean’ edges of the wound and the apparent lack of any tooth ‘rake’ marks or puncture marks around its edge.  My opinion was confirmed by Dr. Nancy Anderson, a veterinarian with the University of California Davis Wildlife Center and a former veterinarian at Six Flags Discovery Kingdom (who until recently had their own orca and who still have dolphins in captivity), who said the injury did not have the characteristics of a wound caused by another orca.  She was quoted as saying:

“The edges of that wound are so smooth. If it were the teeth of an orca, there is no way it could look like that,” Anderson said. “It looks more consistent with the animal getting snagged on something and pulling away from it.”

SeaWorld San Diego has sharp edges along the top of the gates that separate the different tanks and if Nakai had lunged on top of one of these he may have been hurt.  However, as I had heard that there were rumours around that SeaWorld was using laser treatment – and such treatment could be used to debride (‘clean up dead tissue’) from the edge of a wound — I then thought that such treatment may have impacted on the visual nature of the edge of the wound.  By ‘tidying’ up the edge of the wound the overall impression anyone would get from a photograph could be misleading and the ‘clean’ edge of the wound a result of the sugery.

I therefore decided get on a plane to San Diego to go and see Nakai for myself and to also try and talk to the trainers and find out what had happened.  When I was in the park the trainers and security guards were not happy with me trying to photograph Nakai and had me stop photographing from certain points. They obscured other observation points by moving sun umbrellas and outdoor gas heaters in front of viewing spots and they moved Nakai to prevent me taking photos at all.  The security guards would not let me talk to the trainers either.

Despite these impediments, I did manage to obtain a few images.  One clearly shows a gash to the side of the wound (Nakai’s left side) and another shows four puncture marks, curved to the same shape and size as the wound.  All those marks are also visible in a photograph of the wound, taken a few days prior to my arrival, which has not yet been released to the public.

As for the gash on the side of the wound, that appears to be a tear in the flesh that may have occurred in a number of ways, but it would be speculation to determine how it happened without SeaWorld having the integrity to come forward with their video tapes and photographs.  As they have not done so, their evidence must be incriminating.

SeaWorld has changed their stance on the injury when they also stated that it occurred during ‘normal social behaviour’, which is consistent with the puncture marks being inflicted during a fight and the wound being a bite mark.

The question then remains: what was the primary cause of the injury?Regardless, the end result is a traumatic wound to an orca who was bred in captivity – showing that even those born into this world of entertainment, suffer.

Okay, I think we have officially analyzed this wound to the maximum extent possible, given the information on hand. I don’t think there is much to add unless new information comes to light.

15 thoughts on “Was Nakai Bitten? Analysis From Ingrid Visser”