Already on Hawaiian beaches, and in Hawaiian ocean life. And coming soon to a west coast beach near you. It’s like a malign Butterfly effect.

In her lab, Jantz sliced open the stomach of a lancetfish for CNN. You may never have heard of the lancetfish, a sometimes 4- to 6-foot long fish with enormous teeth. But bigeye and yellow fin tuna eat lancetfish. Tuna ends up on our plates.

Jantz pulled out a 12 by 12 piece of indigestible black plastic. “It would be difficult to pass through the system,” said Jantz. “I’ve found several fish with the same black plastic bag, just like this, even larger. If it gets to a certain size, the fish is going to feel like it’s full.”

Jantz conducted a study that included 64 fish of varying species. Twelve percent of them, she said, contained plastic. When she looked just at lancetfish, 45% had plastic. “One concern that we have and don’t know is if any chemicals from the plastic are absorbed into the tissue of the fish, which is a problem if consumed by a fish that we consume. That’s definitely the next step, what is the impact?”

Across the island in David Hyrenbach’s lab, the impact of plastic debris is apparent among the animal species he studies: birds. Hyrenbach cut open the bellies of some albatross for CNN. Plastic pieces spilled out of the belly of a 2-month-old albatross. Eighty percent of the stomach was packed with plastic.

Hyrenbach, an assistant professor of oceanography at Hawaii Pacific University, pulled out a small bottle top. “Toothpaste top?” he said. “No, cap of a medicine tube.” He reached into the stomach again. “Oh, it’s a brush, you see?” There were the unmistakable bristles of a hairbrush.

“Morally, this is terrible. How is this possible? Majestic, far ranging, beautiful birds, in a pristine place of the pacific, the northwest Hawaiian islands, you open them up and this is what you find,” said Hyrenbach. 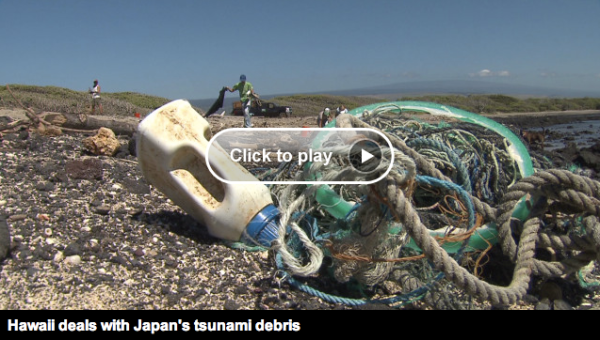 One thought on “Forget Godzilla. What About Japanese Tsunami Debris?”