A few weeks ago I dug into the details of a minor incident in which Taku gave former SeaWorld Florida trainer Jeff Ventre an unscheduled bump.

There were two aspects I have been meaning to follow up on, which further illustrate the complexities and subtleties of killer whale entertainment.

As I noted in the previous post, Taku’s little stunt was written off as “baby behavior.” Calves are naturally immature, inexperienced, and can be unpredictable. According to Carol Ray, another former SeaWorld Florida trainer from that era, Katerina and Taima were also well known for that sort of acting up as calves. Former SeaWorld Florida trainer Samantha Berg adds: “Taima had her way with Teri Corbett’s ponytail on more than one occasion, until management decided that women working Taima in the water had to wear their hair in a bun. But I don’t know how long that rule lasted.”

So when calves went off script it was tolerated–up to a point.

But the fact that calves are unpredictable and sometimes do not do what they are supposed to do created an interesting dilemma for SeaWorld regarding waterwork. On the one hand, a number of SeaWorld killer whale mothers have been sensitive to whether their caves were with them in the pool. The most notorious is Kasatka at SeaWorld California, whose profile notes that aggression was sometimes linked to “when she was separated from her calf and her calf was in distress.” Kasatka’s profile includes a pretty long rap sheet of incidents, a number of which were attributed to a calf being in another pool and/or vocalizing. 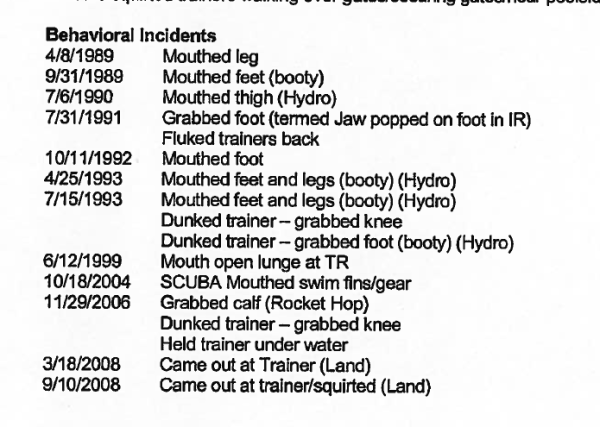 Of course, the most dramatic incident was when she repeatedly dragged Ken Peters to the bottom of the pool in 2006, a scene which features in Blackfish.

So, for whales like Kasatka who liked to have their calves around, it could be an important safety measure to have a calf in the show pool if the mother was performing. Former SeaWorld California and Texas trainer John Hargove explains that a calf would have to be quite old before SeaWorld California would risk separating the calf from Kasatka when she was performing, and that even then it was very important to keep the calf calm and under control in a back pool, because any social distress or vocalizing could set Kasatka off. “It’s a very long time before waterwork was done with Kasataka with her calf in another pool. And even as a 7 year old, the calf still needed to be under control in a back pool.”

“Every mother whale has a different level of tolerance for when you can separate her calf away from her or how long she can be separated from them. So even though this is a part of training and approximated on all of them, some like Kasatka and Takara, for example, are much more sensitive and we proceeded much slower and cautiously.  Nearly all of Kasatka’s incident were related to her calf. Not all but most.”

But having a calf in a pool with waterwork going on could also be a safety hazard, because calves (as Taku showed above) don’t always stay out of the way. So SeaWorld had to account for that risk as well. According to Hargrove: “Due to the risk of a calf splitting during waterwork, in California we were not allowed to do aerials (hydro’s and rocket’s) with the calf being held under control in the same pool.”

So you can see how complex it can get, and how SeaWorld had to take careful account of how each killer whale mother might react to calf separations, and also account for what dangers a calf might pose to trainers if present during a performance. As Kasatka’s record, and Ventre’s bump with Taku, show, it is hard to get subjective judgements like that right every time.

The one other thought-provoking wrinkle brought out by Ventre’s video of Taku and Katina, is the awareness and experience Katina showed in popping up to bail Ventre out when Taku acted out. Ventre comments: “Katina did me a favor by blocking out Taku. And she did it in such a thoughtful way, by both protecting me from him, and not getting him more excited. She was gentle. It shows how aware she is.”

John Jett, who worked with Ventre as a trainer at SeaWorld Florida, also picked up on that: “Beautiful block by the black and white Cadillac!  Tina is one freakin’ smart whale, at least that was always my take on her.”

So it is not just SeaWorld and the trainers that take measures to address the rambunctious and unpredictable nature of killer whale calves, it is the mothers themselves. That is pretty cool, and it is appreciated by the trainers. “God bless good moms like Katina, and Kasatka, and Takara who totally help us out with sometimes unruly calves,” says Hargrove. “Katina’s behavior was consistent with what a good “mom” during these learning curve situations with the calf.”

Katina was indeed considered to be, as Jett said, a “Cadillac” whale–reliable, smart, and always adjusting to the situation. And according to Ventre, who worked with her in the water a lot, that sensitivity and awareness made her a fantastic, touch-steering, waterwork whale. To illustrate he sent me the following video, which depicts a complete “hot dog” show sequence, from May 1995:

Before you watch, here is his commentary:

“It’s a pretty good show, with some minor dings. The Cadillac comes out in this. Some of the underwater stuff makes this footage special. She makes micro adjustments for the trainer when “docking” for foot pushes; she slows down “just a hair” when picking up for a rocket hop (Tai [Taima] would just blast thru you); she’s calm when I’m doing show lines in the beginning. Also, at the very start of the segment it looks like my right foot slips (underwater) and she stays patient while I adjust.”