Sure, sure. Correlation is not causation. But it’s still worth looking at and considering the correlation, so thanks Wonkblog. 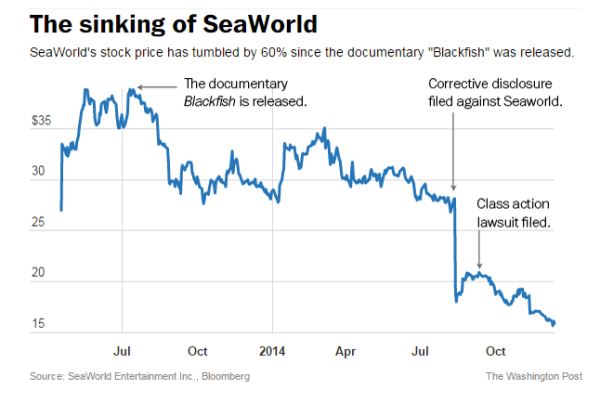 Jim Atchison, the chief executive of SeaWorld Entertainment, which operates SeaWorld theme parks, resigned Friday morning. Atchison’s departure comes on the heels of what has been a terrible year for the company. In the first nine months of 2014, SeaWorld’s revenue fell by more than seven percent, and its attendance dropped by nearly five percent.

The changing of the guard is likely the result of something that occurred in July 2013: namely, the release of the documentary “Blackfish.”

“Blackfish” was met with both critical praise and public uproar. The documentary depicted cruel treatment of the orca (or killer) whales that SeaWorld holds in captivity and features among its biggest attractions. It was seen widely. And the response has been paralyzing (even despite an effort to discredit the documentary).

Personally, I think that there is more going on with SeaWorld’s drop in attendance and share price crash than Blackfish (though I do think Blackfish and the investor lawsuits at least partly account for it). Consider, also, that SeaWorld has basically been offering the same show for 50 years, and today it is even less thrilling since trainers are no longer leaping off orcas. Throw in a general public sensibility that increasingly questions the exploitation of animals for entertainment (at circuses and zoos, as well as at marine parks), and you can see why Shamu might not have the same drawing power as Harry Potter World.

So, does Atchison’s departure signal that SeaWorld might be ready to make big changes? I did an interview with NPR’s All Things Considered today, to discuss Atchison’s ouster. I said I suspected the most likely change is that SeaWorld will over time start to move its killer whale entertainment business abroad to more willing audiences in Russia, Asia and the Middle East. But one thing I should have mentioned to Greg Allen, the reporter, is that the only certain signal that SeaWorld plans to reinvent itself and evolve away from killer whale entertainment as the core of its business and brand would be a cessation of killer whale breeding. No breeding means that eventually there will be no captive killer whales. Anything else is just spin aimed at somehow perpetuating the Shamu Show, whether here in the US or abroad.