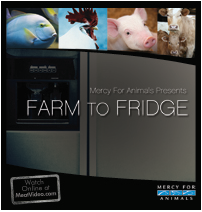 You may not know it, but the single most powerful act you as a human being can take to fight global warming, fight the abuse of animals, and fight the outbreak of global superbugs like avian flu is to become a vegetarian (if you want to know why, read this book). How’s that for a three-fer?

So against that context, we have a good news/bad news situation to report.

The bad news: Americans are still meat gluttons (we consume one-sixth of the total meat consumed annually by the planet, but represent only one-twentieth of the population).

The NYT’s Mark Bittman digs into the data, and the possible reasons Americans are slightly reducing their meat consumption. At least part of the reduction seems to be that Americans are increasingly concerned about the moral and environmental implications of eating meat.

That’s a big deal, I think, because it suggests that awareness and knowledge (and not just cost) can change people’s attitudes about meat, and the frequency with which they eat it. And I hope to do a lot more writing about this because the consumption of meat has such a huge impact on so many critical issues.