Thanks to Tommy Lee and PETA, the methods used to extract sperm from killer whales for the purpose of artificial insemination are getting plenty of attention. Now the world probably knows a lot more about the mechanics involved in working with male killer whales than it probably ever wanted.

Well, for those of you who can handle it, and who want to know even more, here is what goes on from the female side of the equation. The pics in the slideshow below show Orkid, a 22 year-old female at SeaWorld San Diego undergoing recent training for the procedure, and an up-close of the actual procedure being performed (this picture was taken in 2005).

As background, Orkid is the only mature female at SeaWorld’s parks who has never given birth to a calf. She has been inseminated many, many times without success, and these training pictures–taken in August–seem to indicate that she is being prepared for insemination yet again, or perhaps has already been inseminated.

I was also tipped to a YouTube video clip from Animal Planet that also gives a very up close view of what is involved in inseminating a female killer whale. In this case the killer whale is SeaWorld’s Kasatka, who was SeaWorld’s first female to be artificially inseminated with success (using Tilikum’s semen), in 2000.

Here’s a description of what the video shows, from a friend who follows the AI program closely, and sent me the link to the video:

Basically, they push that tube down into the vagina, through the cervix, and a camera is threaded down it to see what they are doing. They actually inject semen directly into the womb, using the camera to help get it into the uterine horn that they detect is ovulating.

The video embedding has been disabled, which seems increasingly common with videos which show the husbandry practices behind killer whale shows. But click on the video image to be taken to the video. 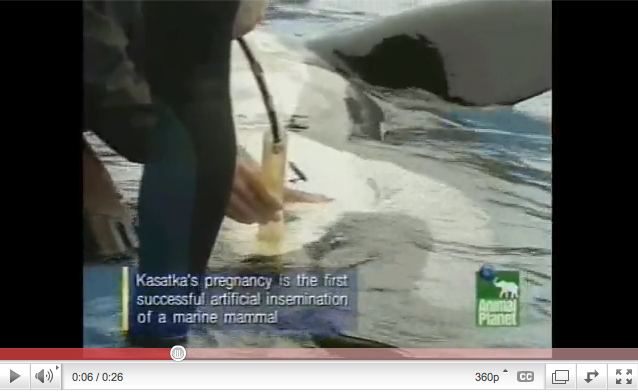 At first it was a classic PETA/Celeb/SeaWorld dust-up that allowed a rock star to get some (non-tattoo) ink, PETA to stir the pot, and writers at TMZ to have a laugh by writing headlines like: Tommy Lee Explodes Over Whale Sperm (get it?) and SeaWorld–We DON’T Use Cow Vaginas! (I guess it was the marine park equivalent of the old political trap: “When did you stop beating your wife?”).

Now, before I get flip myself  I want to emphasize that SeaWorld’s breeding program is a critical issue which does deserve attention, since SeaWorld relies on captive breeding to keep its marine parks stocked with the performing Shamus that are so highly effective at parting tourists from lots of dollars. Breeding, in short, is what keeps the show going year after year, decade after decade.

But it’s not really news, or even surprising, that in addition to breeding orcas by shipping the males around for stud duty, SeaWorld has devoted time and research to developing techniques for artificial insemination (or AI). And when I wrote about SeaWorld’s biggest, and most prolific breeder, Tilikum, in The Killer In The Pool, I touched on AI briefly and in somewhat graphic terms. John Hall, a former scientist at SeaWorld San Diego recalled the early years of SeaWorld’s AI efforts by telling me: 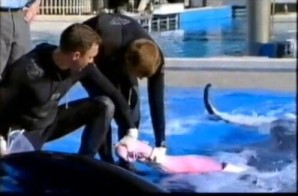 That’s where Tommy Lee, as he notes in this letter to SeaWorld, started getting cow vagina on the brain, and decided that the man-orca-cow part combo was too much for his refined sensibilities. Now, SeaWorld long ago gave up using cow vaginas to assist their bull orcas to a happy ending, and it could be that they were in fact using artificial vaginas (which really do exist–“Can be held with one hand!”), as if that really makes a difference.

Instead, the methods evolved so that the trainers, using highly unsophisticated equipment (rubber gloves, KY jelly, and a Nalgene bottle) could get the job done. I’m sure SeaWorld doesn’t put that duty in the job description, but you can read more about AI at SeaWorld at The Orca Project.

Now Tommy Lee has smartly upped the ante (and kept the story rolling), by demanding that he be allowed to make a “sex tape” of the whole process. Of course, the last time he had such a good publicity run another sex tape was involved, and he clearly hopes an orca sex tape might be similarly shocking, writing: “[The public] has undoubtedly never seen a sex tape like this.”