The photo I published yesterday is leading in interesting directions.

First up, I wanted to post this clip of the Taiji dolphin drives. You’ve likely seen video of what the drives involve, and The Cove has done a lot to go behind the screens and try to help the public see the reality of the drives. I am posting this clip not to gratuitously add to the bloody imagery. I am posting it because it is a clip filmed for the BBC in 1986. So it is a reminder that this goes on year after year, and has been going on year after year for a long time. It is hard to imagine the sheer number of dolphins and whales who have gone through this, but the time span between this clip and today forces you to stat grappling with that question. The clip also makes me wonder whether humanity, and humanity’s awareness of this cruelty, will evolve enough to mean that the drives will no longer be going after another 35 years have passed.

Next up, is another account of the thought-provoking unnatural paths which life at a marine park can lead an animal down. I don’t have pictures (so this is more of a “Knowing Is Important” item), but this is the story of a dolphin called Shalest, who was at SeaWorld Florida in the 1980s/1990s. I had heard of Shalest before, but her story was brought up again in response to my effort to find out if there were more stories like the one posted in a comment, by Jen, on yesterday’s Seeing Is Important post:

There was a dolphin called Bubbles in the the Gasser families travelling circus that had to have a pectoral flipper amputated after catching a serious pseudomonas infection that caused the fin to rot and Gangrene set in. She recovered and performed in shows again but died a few months later after developing Hepatitis.

My search for more stories prompted this, on Shalest, from former SeaWorld trainer Jeffrey Ventre: 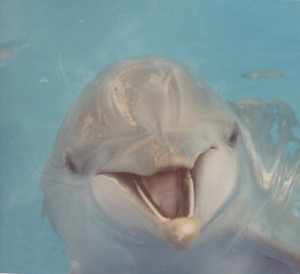 One day she was in a small side pool at W&D stadium with other dolphins (circa 1991) all of which were more dominant than she. Although it wasn’t directly witnessed, what apparently happened was she was being chased and tried to flee (a nice option for wild animals); similar to how Morgan kept trying to get away from the animals at LP on that video… but much smaller space with quicker movements, in a shallow side pool; so nowhere up or down to go in the water column, either.

She must have been near the perimeter of the pool and when she accelerated, she severely sliced a large piece of her tail fluke… but not quite all the way off.  The median notch divides the tail into two lobes, each being a fluke.  So she sheared about half of one lobe/fluke… but it was hanging on…   not completely severed. And it was bleeding.

I remember inspecting the pool to try and determine what could have caused the partial amputation. When I looked into the water outflow pipe, which was of fairly large caliber (guessing 12 inches in diameter) the pipe tube was lined with PVC…  The edge of the PVC liner formed a sharp plastic angle where it was cut with a saw, I think.  If you’ve ever worked with PVC, then you can imagine how sharp an edge can be.

It was not a stable injury. It was a displaced partial amputation made worse with swimming.  Vet Mike Walsh tried to suture it back on, but it didn’t take, began to show signs of infection and/or necrosis, and so the fluke was fully amputated later.  The tissue eventually granulated and she survived it, but did die a tragic death later.

Regarding Shalest’s death, I have a number of memories of Shalest from a discussion between former SeaWorld trainers, which explain what happened. These trainers no longer support captivity, and Shalest deeply affected their thinking (see, KNOWING is important). It is hard to know whether Shalest’s death was connected to the stress of the injury, or the general stress of being a small dolphin in a confined pool. But every story is important, because it brings forth details that are unique to the experience of each animal. The aim is not to anthropomorphize, but to individualize.

From one former SeaWorld trainer:

My most painful Sea World memory was of the Atlantic Bottlenose dolphin Shalest, who died from, in my opinion, stress-induced malnutrition/starvation. Looking back it seems tragically ironic that a dolphin born and raised in captivity under the principles of behavior modification, learned them so well that the food SW trained her to eat no longer continued to be reinforcing for her. It was attention from these same people that she solicited and appeared to crave most prior to her death.

From Samantha Berg, another former SeaWorld trainer, in response:

I remember Shalest, especially during her last days looking like a skeleton with the ghost of a dolphin exterior.  She literally starved to death.  I can still see her in the back pool swallowing and regurgitating the same herring all day long.  Before Shalest got sick, she was such a phenomenal animal.  You could get in the water with her and hug her for hours and she would just hang out.

Dolphin anorexia is a good description.  She started regurgitating her food and playing with it.  It was more reinforcing for her to do that than eat it.  The animal care staff tried force feeding her, but it didn’t do any good.  She just kept eating and throwing up.  Eventually starved herself to death.

Again, the point here is not to gratuitously dramatize, though this is a dramatic story. It is to dig deep into the reality of Shalest’s experience, so we can better understand, which is the key to critical thinking and judgement.

Feel free to share more stories or pictures in the Comments.

5 thoughts on “Seeing (And Knowing) Is Important: Part 2”