Via Andrew Sullivan’s Daily Dish, here’s a fascinating Information Is Beautiful graphic accounting of how humans died over the course of the most recent century (click on image to go big): 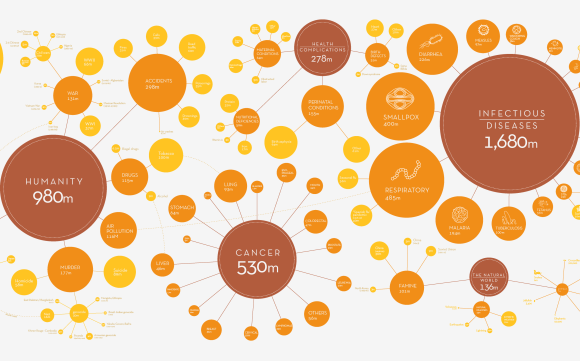 A couple of things jump out at me. First is the prominence of disease (which took out just over 4 billion of us). Second is that infectious disease mortality (1.7 billion) vastly outweighs cancer mortality (.53 billion), which you wouldn’t know based on how we allocate research dollars. Third is that cardiovascular disease, which is really to say lifestyle (meat eaters and smokers, listen up!) killed more than 1.2 billion people.

I am also impressed that we–humanity–managed to take out about a billion or our own species (and you can only imagine the opportunity cost of all the resources we devoted to doing that). And, finally, that the natural world we love to fear (and make reality television series about), was almost benign in contrast, killing just .136 billion of us.

This is a very illuminating way of looking at what really kills us. I would love to see a similar graphic for non-human deaths over he course of the 20th century. Mortality due to humans would no doubt practically blot out the rest of the factors.

One thought on “Biggest Killers Of The 20th Century”