Part of the theory for why marine park orcas injure one another is that the groupings they find themselves in at marine parks are artificial. The groupings have more to do with the park’s needs than they do with family, or orca type ((i.e. killer whales with Icelandic roots might be placed with killer whales that have Pacific roots). And the groupings change as killer whales are moved around from one park to another for breeding, or any number of other reasons (including the need to sometimes separate warring killer whales).

This, of course, is not an aspect of marine park life that marine parks or their supporters are eager to acknowledge or address. So it is always useful to see pictures that help convey what is happening in the pools.

When the four SeaWorld killer whales arrived at Loro Parque in 2006, and were put together in the pools, a new social grouping was created. That demanded a new social order, which in turn meant some beatdowns as the killer whales tried to sort themselves out. These pictures show just part of the result:

These two show Kohana’s dorsal fin and tail fluke, after she was bitten by Keto: 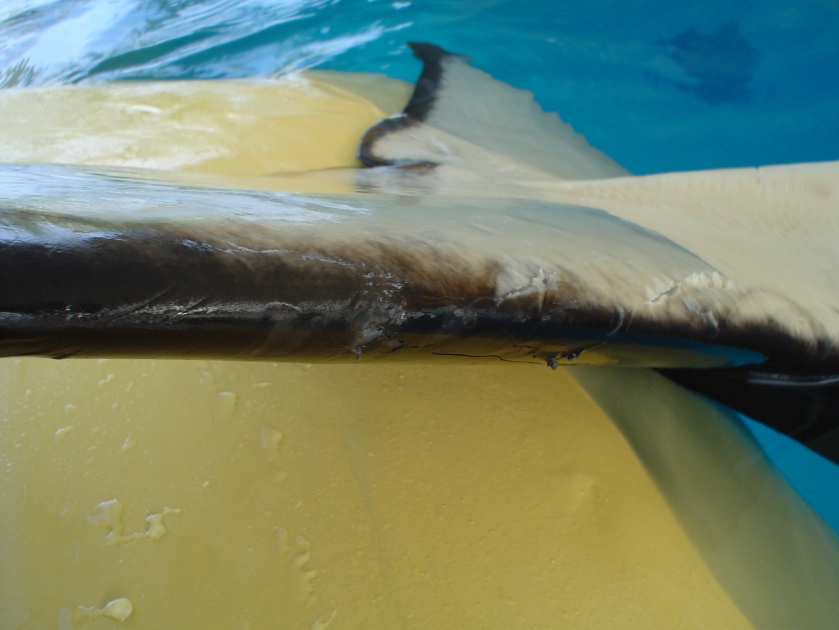 And these two pictures show young Skyla’s raggedy dorsal fin after Kohana went after her:

If you have any photos that document this phenomenon of orca on orca aggression in marine park pools, please send them to me and I will post them as well. It is just one of the many factors that affects the life and psychology of killer whales in captivity (for a detailed report on all the factors that contribute to killer whale stress at marine parks, go here).

25 thoughts on “Do Orcas At Marine Parks Injure One Another? More Photos…”