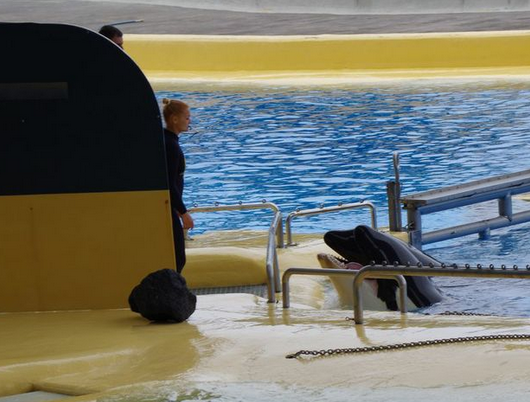 A decision on whether Morgan, the lost young female orca, should remain at Loro Parque is due anytime, and could be released this Wednesday.

The arguments over Morgan have always been based on two completely different, and contradictory, narratives of her life at Loro Parque. Today, over on The Dodo, I took a look at what both sides claim regarding Morgan’s well-being, and how a pregnancy is the big wild card, and would seal her fate if it happens.

Here’s a key part of the story:

Loro Parque, in a statement e-mailed in response to a request for comment, calls Visser’s argument “erroneous and misleading,” as well as “emotionally charged. The statement goes on to try and rebut each of Visser’s claims one by one, and dismisses Visser’s work as an “animal activist opinion piece.” For Morgan, the statement flatly states, “negative welfare conditions do not exist.”

“I’m not an activist. I am a scientist who happens to care about the welfare of animals,” Visser responds. “There is a big difference.” Moreover, Visser’s research and conclusions about Morgan’s life at Loro Parque have won an interesting advocate in Jeff Foster, who spent decades catching killer whales, dolphins, and other animals for SeaWorld and other marine parks. Foster knows a lot about killer whales and how they handle captivity, and is not opposed to captivity for killer whales if they are well-integrated into a stable environment. After observing Loro Parque’s videos of Morgan he was initially skeptical that her experience at Loro Parque was as negative as Visser believes. But based on two trips to observe Morgan (the most recent was last Fall), Foster says he fully agrees that the group of SeaWorld killer whales at Loro Parque is dysfunctional, that Morgan has not been well-integrated, and that Morgan is suffering. “It’s pretty obvious. She’s crying out in distress almost all the time,” Foster says. “You usually don’t hear those vocals from animals unless they are really in distress. The only time I’ve heard them is when we were catching whales and separating them from their families.”

You can read the whole thing here.

Here’s a brief video, showing Morgan’s isolation during a show at Loro Parque earlier this year.