"When scientists say bears are going extinct, I want people to realize what it looks like," says photographer Paul Nicklen pic.twitter.com/foBaqXqOQ4

Watching this video will make you very sad (backstory here). It should. It is heartbreaking.

But the real question is: what are we collectively willing to do about it, if anything? Is it enough to inspire changes in the choices we make and the way we live. Because how humanity lives (what it values and what it doesn’t) is what is starving this polar bear.

Here is just a partial list of all the things we can do that relate to this polar bear and his fate: have fewer children, eat less or no meat, drive less (and walk, bike, or use public transportation more), stop flying so much, reduce electricity consumption, shower a few times a week instead of every day, stop buying so much stuff, and stop wasting so much food. Vote for politicians who believe climate change is happening and are willing to ask for sacrifices to deal with it. Support leaders who are fighting global inequality. Support the global education of women, and family planning. Put the lives and needs of ALL species, and stewardship and conservation of the natural world, above your personal convenience. In short, simplify your life and radically reduce its environmental footprint. What else?

Yes, it involves doing less of a lot of things marketers and our culture want us to do a lot of. Doing fewer things that we associate with comfort and convenience. To live in a way that is radically different from the way we have been raised and acculturated to live. But it really isn’t that hard. And it feels good, because it feels right, to DO something.

So let’s work our way through the list, and then we can honestly lament the condition of this polar bear. Because our tears won’t do him any good. Only actions.

You probably knew that, but the excellent Florence Williams details just how good in this artfully done NatGeo feature:

In England researchers from the University of Exeter Medical School recently analyzed mental health data from 10,000 city dwellers and used high-resolution mapping to track where the subjects had lived over 18 years. They found that people living near more green space reported less mental distress, even after adjusting for income, education, and employment (all of which are also correlated with health). In 2009 a team of Dutch researchers found a lower incidence of 15 diseases—including depression, anxiety, heart disease, diabetes, asthma, and migraines—in people who lived within about a half mile of green space. And in 2015 an international team overlaid health questionnaire responses from more than 31,000 Toronto residents onto a map of the city, block by block. Those living on blocks with more trees showed a boost in heart and metabolic health equivalent to what one would experience from a $20,000 gain in income. Lower mortality and fewer stress hormones circulating in the blood have also been connected to living close to green space.

It’s difficult to tell from these kinds of studies why people feel better. Is it the fresh air? Do certain colors or fractal shapes trigger neurochemicals in our visual cortex? Or is it just that people in greener neighborhoods use the parks to exercise more? That’s what Richard Mitchell, an epidemiologist at the University of Glasgow in Scotland, thought at first. “I was skeptical,” he says. But then he did a large study that found less death and disease in people who lived near parks or other green space—even if they didn’t use them. “Our own studies plus others show these restorative effects whether you’ve gone for walks or not,” Mitchell says. Moreover, the lowest income people seemed to gain the most: In the city, Mitchell found, being close to nature is a social leveler.

Read the whole thing here. Then go for a walk outside.

While there have been many releases of captive dolphins, there have been relatively few releases of long-term show dolphins, and even fewer that were fully documented. In recent years, however, two bottlenose dolphins (named Tom and Misha) were successfully released back into the Aegean, and three bottlenose dolphins (Jedol, Chunsam, and Sampal) were successfully released off Jeju Island, South Korea. All had spent years in marine parks, yet managed to learn what they needed to learn to survive again in the ocean.

Both releases were carefully documented, during and after release, and show what can be achieved, even with dolphins that have suffered greatly in captivity. My story about these dolphins,  and the question of captive release, was just published at National Geographic.

In early January 2011 Jeff Foster, a 55-year-old marine mammal expert from Seattle, arrived on the stony shore of a pristine bay near the small village of Karaca, situated in a corner of the Gulf of Gökova on Turkey’s southwest coast. Just offshore was a collection of floating pens used to farm fish. In one of them, which had been modified and measured about a hundred feet across and 50 feet deep, two male bottlenose dolphins swam in slow circles.

Tom and Misha, as they were called, were in lamentable condition. As far as anyone could tell, they’d been captured in the Aegean sometime in 2006, and almost nothing was known about their lives in the wild. After starting their captive lives at a dolphin park in the seaside town of Kaş, they’d been trucked a short distance inland in June 2010 to a crudely constructed concrete pool in the mountain town of Hisarönü so that tourists could pay $50 for the chance to grab their dorsal fins and get a ten-minute tow. Hisarönü consists mainly of cheap hotels and bars with suggestive names like Oh Yes! and thumping late-night music. It would be hard to imagine a more incongruous or disorienting location for two ocean-born dolphins. An inadequate filtration system quickly left the bottom of their pool carpeted with dead fish and dolphin feces.

Within weeks, an outraged grassroots and social media campaign organized by dolphin-loving locals had forced the place to close. In early September, amid fears that the dolphins would soon die, the U.K.-based Born Free Foundation, which is dedicated to the protection of animals in the wild, stepped in and took possession of Tom and Misha. The two dolphins were bundled into a refrigerated meat truck lined with old mattresses and transported to the pen off Karaca. Foster was hired to help Born Free attempt something truly ambitious: restore Tom and Misha to peak physical condition, teach them what they would need to know to live as wild dolphins again, and release them back into the Aegean. “It is extremely high risk with a creature that is not predictable and easy,” says Will Travers, Born Free’s president. “But we realized that there were very few options for them, and they were likely to die unless somebody did something.”

You can read the whole thing here. And there is a great photo gallery here. Hope you find it interesting.

To follow the stunning drone footage of killer whales off Norway, let’s turn to the National Geographic photo blog Proof, which in September published some incredible photos of Norwegian killer whales feeding on herring. Not only are the photos, by Paul Nicklen, beautiful. But they also show yet another highly intelligent, cooperative killer whale hunting behavior:

The orcas are working together, performing a highly coordinated exercise in the herding of fish–huge schools of herring, larger than any other I have ever seen, compacted together into a tight ball. The immense ball of fish: a mere 5 feet under the ocean’s surface, buckles and sways, trying to escape, but the orcas swim around the ball making it tighter and tighter. In this sophisticated team effort every orca plays a role and every member of the pod gets their turn to feed. Young calves flank their mother’s side and mimic every move as they hone their herring-herding skills. We can hear the constant high-pitch sound of their echolocation calls all around us.

So effective, in fact, that some humpbacks show up to take advantage of the feast that is created.

Read all about it. And here’s a sample of the photos: 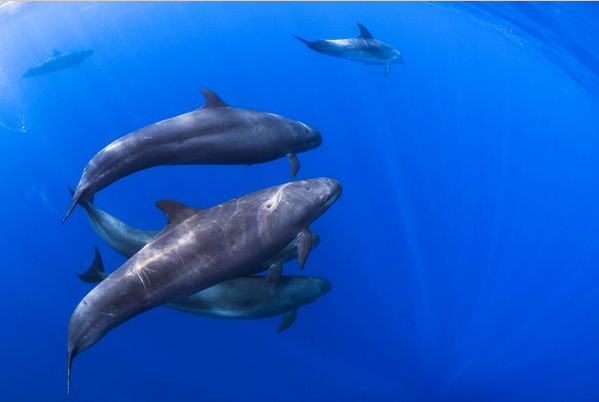 Whales on the Move

A pod of false killer whales (Pseudorca crassidens)—a rare species related more to dolphins than true killer whales, or orcas—swim off the coast of New Zealand on April 13.

False killer whales swim in the open ocean and often socialize with bottlenose dolphins. Orcas, however, are not so friendly. They have been seen attacking their false counterparts.

Of all the intelligent, self-aware creatures under threat by man, the plight of the elephants is the most urgent and tragic. The reason is simple: they are being killed for the most indefensible of reasons (an Asian love of ivory trinkets), and the killing is so successful that 98% of the African population has been wiped out in a century, leaving a real possibility that African elephants will be extinct in as little as a decade.

That is an epic human failure–perhaps the most epic failure–to respect, steward, and conserve one of Earth’s most fascinating and iconic creatures.

Carl Safina is on it, and recommends the PBS special “Battle For The Elephants” as must-watch TV. It came out of Brian Christy’s epic National Geographic feature, Blood Ivory.

I hadn’t heard about it before, but dug around a bit.

Here’s the description from PBS:

The film tells the ultimate wildlife story — how the Earth’s most charismatic and majestic land animal today faces market forces driving the value of its tusks to levels once reserved for precious metals. Journalists Bryan Christy and Aidan Hartley take viewers undercover as they investigate the criminal network behind ivory’s supply and demand. In Dar es Salaam, Tanzania, one of the world’s main ports for smuggled ivory, Hartley attempts to buy large quantities of tusks from poachers. In China, Christy explores the thriving industry of luxury goods made from ivory and the ancient cultural tradition of ivory carving.

And here is the full episode:

Paul Nicklen really is the most extraordinary photographer. This new photoset perfectly captures the conservation dilemmas created by human intrusion on the manatee habitat and the human desire to get close to manatees. Stunning work:

The thing that Nicklen conveys so well is that even when humans have benign or even positive intentions the degree of interference and impact on the environment and lives of non-human species is deeply disruptive.

The full photoset is here, and each photo is as powerful as the next. You can look at more of Nicklen’s work here.

I probably posted this sometime in the distant past, but I can’t resist putting it up again because it is one of the most extraordinary videos you will see (and it just popped up on Upworthy, which is proving to be a very worthy site).

National Geographic photographer Paul Nicklen shares the incredible story of his personal encounter with a predatory leopard seal in the frigid waters of the Antarctic. These photographs–and many more–appear in his book, Polar Obsession. Available at http://www.nationalgeographic.com/books.

PS: Does Nicklen have the most incredible life, or what?