A moving and thoughtful meditation on how caring for other creatures can change who you are and how you see the world:

A friend of mine once told me that soon after he started beekeeping, he began noticing color differently — began picking out particular hues, as a bee might do. And as the summer wore on that year in Oxford, I realized that I, too, was seeing differently. Cycling to and from work, I spotted wild places I hadn’t before; I became aware of what creature life existed between and through the city’s walls. I was newly alert to changing weather patterns, shifting seasons — I noticed how these affected the colony in my hive; how vulnerable pollinators were to environmental change. I’d imagined the bees might offer an escape from the wider world; in fact they seemed to be leading me into a new relationship with it.

When we connect with nature we plug ourselves into the universe.

The Sound Of Icebergs Melting: My Journey Into The Antarctic

It was the opposite of what we imagined. Rather than water dripping down through air, we were listening to air escaping up through water. We were so close to the ice that this ancient fizz was surprisingly loud. Though we humans never hear it above the surface, this is the sound the Antarctic makes every summer. And as the planet heats, the sound is getting louder.

The Baller: Can attitude help save the planet? A frightened climate reporter meets an ex-basketball player with a serious game plan

Attempting some sort of equanimity about, basically, horror, I’d been vacillating along a “hope or despair” continuum. But recently I’d decided that both ends of that scale were bankrupt. Hope wasn’t precisely rational, and despair was too cruel to the living—anyone who genuinely cared about a place or a child had to come up with something, anything, more useful than “Good vibes only” or “We’re screwed.”

So I was quietly seeking a better approach as I wrote story after story on efforts to curb climate emissions. And while working on a cover story earlier that year about how the built environment (cities, roads, offices, homes, infrastructure) was an enormous part of the problem, I’d called up Mazria, who was recognized as a thought leader on the topic.

One hour on the phone with him had jolted me.

After I hung up, I told a colleague, “I just spoke with a man who has a strategic plan to beat climate change. Not ‘fight the good fight,’ but win.”

The Ecological Vision That Will Save Us: To avoid the next pandemic, we need a reckoning with our place in nature

With faith, you can ask how life will be on the other side. Will you be changed personally? Will we be changed collectively? The knowledge we’re gaining now is making us different people. Pain demands relief, demands we don’t repeat what produced it. Will the pain of this pandemic point a new way forward? It hasn’t before, as every war attests. This time may be no different. But the pandemic has slipped a piece of knowledge into the body public that may not be easy to repress. It’s an insight scientists and poets have voiced for centuries. We’re not apart from nature, we are nature. The environment is not outside us, it is us. We either act in concert with the environment that gives us life, or the environment takes life away.

“I think a question that we’re not asking ourselves is: ‘Isn’t humanity committing suicide with this indiscriminate and tyrannical use of nature?’”

–Pope Francis (from his list of tips to becoming a happier person).

1) Hope And Change? Honestly, I’m more interested in change. But I’m glad to hear mention of the climate (FINALLY!), and I sincerely hope that the aspirations and ideals expressed so beautifully in this speech translate into true leadership and a kickass political strategy that leads to a real shift in what America cares about, and what sacrifices America is willing to make for the global good.

2) Annals Of Inexplicable Subsidies: Does federal flood insurance, which encourages people to build in vulnerable locations, make any sort of sense anymore? Not really.

3) Deja Vu All Over Again: Another week, another brutal storm for the Northeast. This one with wind, rain, AND snow. 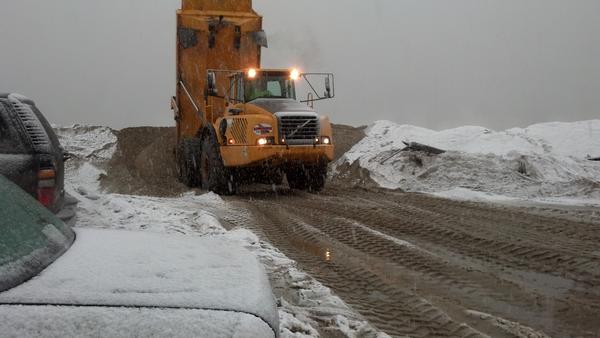 BONUS VIDEO(S): Nine awesome TED Talks which aim to show you nature from a different perspective or in a different light.

A searing, hilarious, and sadly accurate cartoon railing against the modern attachment to screens at the expense of real interaction with one another and nature.

This is my favorite panel, but make sure you go read the whole thing.

I hope the world takes note of Carl Safina, and his new book, The View From Lazy Point (NYT review is here; Mother Jones review here). Safina is an original and deep thinker, and The View From Lazy Point is both an homage to the natural world and a clarion call–that is remarkably gentle yet utterly persuasive–for reimagining how humans live and interact with our humble planet.

I was drawn to Safina’s work because I have long been troubled by the idea that humanity has been intelligent enough to achieve great technological triumphs, yet not wise enough to find harmony and balance in human affairs or our understanding of the finite nature of Earth. We are well past the need to try and arouse humanity from its material, consumptive ways with a deluge of depressing and enervating detail about environmental destruction. That’s been going on for decades, and people have either chosen to recognize reality, or blind themselves.

What’s needed now are pathfinders and prophets who can redefine what it means to be human, and what changes humanity should make to its behaviors, economies, and cultures. Safina is searching for those sorts of answers and that’s why he is worth reading and talking about. I have no doubt that a critical mass will eventually develop behind the need to reinvent humanity. The only question is what sort of planet we will be living on when it happens. I am pessimistic, even nihilistic, about the prospects for a reasonable transition to this new epoch. But all anyone who cares can do is put out a light and hope people are drawn to it. As Safina writes: “Just as we went from hunter-gatherers to agriculturalists to civilized societies, now we must take the next great leap: from merely civilized to humanized.” Or wise. That would be nice.