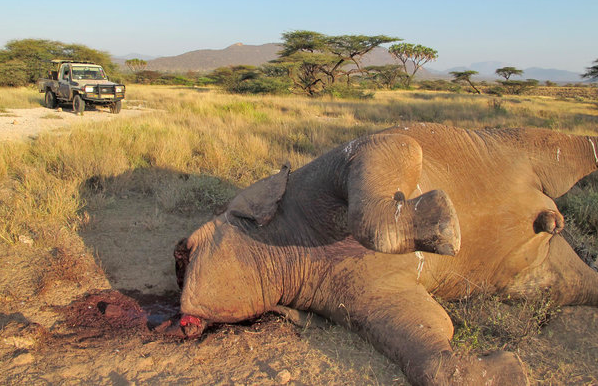 This brutal photo comes from a heartbreaking gallery on elephant poaching in the New York Times.

It accompanies a New York Times oped-ed plea for a global response to elephant slaughter, from the authors of a recent study detailing the devastating impact of poaching on African forest elephants:

THERE is nothing a mother elephant will not do for her infant, but even she cannot protect it from bullets. About a year ago, poachers attacked a family of forest elephants in central Africa. The biologist who witnessed the attack told us that wildlife guards were completely outgunned. In the end, an elephant mother, riddled with bullets and trumpeting with pain and fear, was left to use her enormous body to shield her baby. Her sacrifice was for naught; the baby was also killed. Such is the reality facing African forest elephants today.

This mother and child were just two of the tens of thousands of forest elephants that have been butchered over the past decade. A staggering 62 percent vanished from central Africa between 2002 and 2011, according to a study we have just published with 60 other scientists in the journal PLoS One. It was the largest such study ever conducted in the central African forests, where elephants are being poached out of existence for their ivory.

In China and other countries in the Far East, there has been an astronomical rise in the demand for ivory trinkets that, no matter how exquisitely made, have no essential utility whatsoever. An elephant’s tusks have become bling for consumers who have no idea or simply don’t care that it was obtained by inflicting terror, horrendous pain and death on thinking, feeling, self-aware beings.

They make a powerful argument that the ongoing elephant slaughter is immoral and completely unacceptable. But they finish with an almost polite plea for sanity:

Poaching is big business, involving organized-crime cartels every bit as ruthless as those trafficking narcotics, arms and people. Existing international laws against money laundering should be used to follow the money trail and to prosecute these criminals.

A universal attribute of humanity is compassion. We protect those in harm’s way. We need to show this compassion to forest elephants, giving them space to roam and protection from danger. Most crucially, people must stop buying ivory. If we do not act, we will have to shamefully admit to our children that we stood by as elephants were driven out of existence.

This struck me as a little anti-climactic. The clock is ticking, the cruelty is extreme, the implications catastrophic. Does anyone think a nice plea like this will save the elephants? Why not call out political leaders and international regimes like CITES? Why not raise the possibility of more radical responses, like boycotts or economic sanctions against countries and economies that are tacitly supporting the slaughter?

I understand there are rules about scientists and advocacy, and that care must be taken not to alienate institutions or potential funding sources. But the time for such niceties is long past, because we are long past the point on so many crises where standard, moderate, calls for action will do the job.  And I am frequently struck by the fact that the urgency and radicalism of the problems we face is rarely matched with similar urgency and radicalism when it comes to proposed solutions.

Extremism is often disdained or dismissed. Given the scale and implications of climate change and species loss perhaps we had better start seeing extremism as a virtue. Or a necessity.

5 thoughts on “Elephant Slaughter: A Call To Radicalism”