The farmers and ranchers who supply the nation with hamburgers, pork chops, T-bone steaks and chicken fingers now confront several crises at once: Large processing plants are shutting down as workers fall ill, many producers were already strained by the trade war with China, and the sudden rise of plant-based “fake” meat alternatives had been starting to capture Americans’ imaginations.

On top of that, the meat business had been attracting growing scrutiny for its climate change consequences in recent years, with scientists and environmentalists urging Americans to eat less meat, particularly beef.

So bad for the climate and bad for workers. Like coal, it also bad for global health (pandemic potential). Though meat is distinctive in one category: the incalculable suffering it inflicts on billions of animals every year.

“This action, which is a gift to the coal industry at the expense of all Americans, is an attack on public health justified by a phony cost-benefit analysis that purposely inflates the cost of MATS and ignores the value of the human health benefits,” Ellen Kurlansky, a former air policy analyst at the EPA who helped to develop the MATS rule, told Reuters.

What should the penalty be for wantonly abusing a shark for ego and social media giggles? We’re about to find out:

Nearly five months after video surfaced on social media of a shark being dragged by a speeding boat, three men are facing animal abuse charges as a result of the investigation sparked by public outrage.

Robert Lee “Bo” Benac, 28, Michael Wenzel, 21, and Spencer Heintz, 23, have each been charged with two counts of aggravated animal cruelty, a third-degree felony, according to a press release from the Florida Fish and Wildlife Conservation Commission on Tuesday. Benac and Wenzel also face one count of illegal method of take of a shark, a second-degree misdemeanor.

If ever there was a moment to draw a clear, bright line regarding animal cruelty, and to set an example that says abusing sharks will come with (severe) consequences, this is it. Hope they throw the book at them and win convictions that count.

That Stinks: On one level, I think it would come as no surprise to dog owners that dogs recognize the smell of their own urine, and are more interested in urine from other dogs (When my dog works over a scent near our house I can almost see her thinking “Dammit, what was the jerk lab down the street doing up here?”–before she squats and does her best to over-write the scent).

Still, researcher Alexandra Horowitz thinks she has created a “smell-mirror test” that is sort of analogous to Gordon Gallup’s mirror self-recognition tests. Her conclusions are interesting, even if Gallup himself disagrees.

Guppy Medal Of Honor: Nothing really surprises me about research that shows animals are smarter and more complex in their thinking than humans have generally (and arrogantly) assumed. But the details are always interesting. So I am happy to know that guppies have distinctive personalities, and that whether they are brave or cowards can be revealed by (okay, this part I don’t like so much) scaring them:

According to the team’s study, published Monday in the journal Functional Ecology, each fish demonstrated a unique response to stress — which they endured every three days in the form of a pulley-rigged lawn-ornament heron named “Grim,” or a predatory cichlid suddenly revealed on the other side of the glass.

“Some of them go straight to the shelter,” said Houslay, an evolutionary biologist and the study’s lead author. “Some just stop moving, maybe hoping they won’t be seen. Some rush to the side and just swim up and down trying to escape.”…

By measuring how long each guppy stayed hidden, frozen or otherwise panicked, the researchers determined that some fish were naturally cowards, and some were relatively brave.

And that wasn’t a fluke. The guppies kept proving their cowardice or braveness in repeated tests — every three days for four weeks.

“We see quite complex strategies; more complex than we thought,” Houslay said. “The variation isn’t just random. There’s something more meaningful going on.”

I often think that we’d be a lot closer to the truth if our starting assumption about animals was that they have intelligence, cognition and any number of other traits which the human animal likes to think of as unique to humans, and then used applied science to try and disprove it–instead of assuming all animals are stupid and then being surprised when researchers reveal something which seems pretty obvious to anyone who has ever spent any time around that type of animal.

But we have to take what we can get. And the more people recognize that fish have feelings and personalities, too, the more we might treat them with the respect and moral consideration they deserve–by which I first and foremost mean STOP NETTING AND EATING THEM.

CBC News continues its invaluable and revealing series on the fate of the North Atlantic right whale. According to a post-summer, post-mortem, at least seven right whales got entangled with fishing lines in the Gulf Of St. Lawrence this summer. Two died, two were freed, two have fates unknown, and one freed itself. And this is just part of a devastating tally overall:

At least 14 whales have died in the Atlantic Ocean this summer, including at least 11 in the Gulf of St. Lawrence. No more than 500 of the animals remain.

According to Hamilton’s research, only one in four or five carcasses washes ashore, meaning the true death toll could be much higher.

“If that were the case, then we’ve just lost a big chunk of the population,” said Hamilton, who described the deaths as “profoundly discouraging.”

So far, the federal government has closed a crab fishery early and is forcing large ships to slow down in the Gulf of St. Lawrence.

What the Canadian government won’t do is commit to requiring changes to fishing gear. Or closing the fisheries which are killing whales.

What would work? Consumer (and restaurant) avoidance of snow crabs, which is the fishery that seems to be doing the most damage.

Most people don’t think much about the upstream impacts of their food choices. Even if they wanted to the issues are obscure and complex, especially when it relates to fisheries. That’s why there is only one clear principle you can rely on: giving up all seafood is the only way to guarantee you are not having any upstream impacts that are killing and endangering other wildlife.

A 1999 investigation by reporter Linda Goldston found that:

Of the 19,361 mammals that left the nation’s accredited zoos from 1992 through mid-1998, 7,420 — or 38 percent — went to dealers, auctions, hunting ranches, unidentified individuals or unaccredited zoos or game farms whose owners actively buy and sell animals, according to transaction data from the International Species Information System.

Just a snapshot in time, after lots of effort by Goldston to get state and federal records (since zoos and the AZA don’t freely share this info). But revealing…

It’s seriously annoying when sea lions and dolphins in the US Navy’s benighted marine mammal program are referred to as “friends,” “capabilities,” or “systems.” They are autonomous (though not free) and sentient creatures, drafted into captive service for military purposes that have nothing to do with their lives or needs:

“Actually, there is a long history of using our friends at sea for these kind of roles, so I’m not dubious,” said P.W. Singer, a strategist and senior fellow at the Washington, D.C.-based think tank New America. “Dolphins have been used in mine hunting in the Iraq war and even anti-enemy swimmer roles in Vietnam. And the reality is that for the time being, animals have superior agility and even sensors than most robotic systems.”

The trend over the past century has been to swap military animals with machines, which is why the horse gave way to the tank and homing pigeons gave way to radios. But engineers see animals and machines as “systems.”

“Same capabilities, different sensor suite,” said Steven Murphy, an Army veteran who now works as a program director for the Physical Security Enterprise & Analysis Group, which staged a demonstration this month. “Marine mammals like sea lions have excellent underwater vision in very dim conditions and dolphins have excellent sonar capabilities. And so we’ve mimicked some of that with hardware in our systems, with sonar capabilities and low-light cameras and other things.”

The hundreds of millions of dollars spent on these programs is money wasted in service of dubious aims. 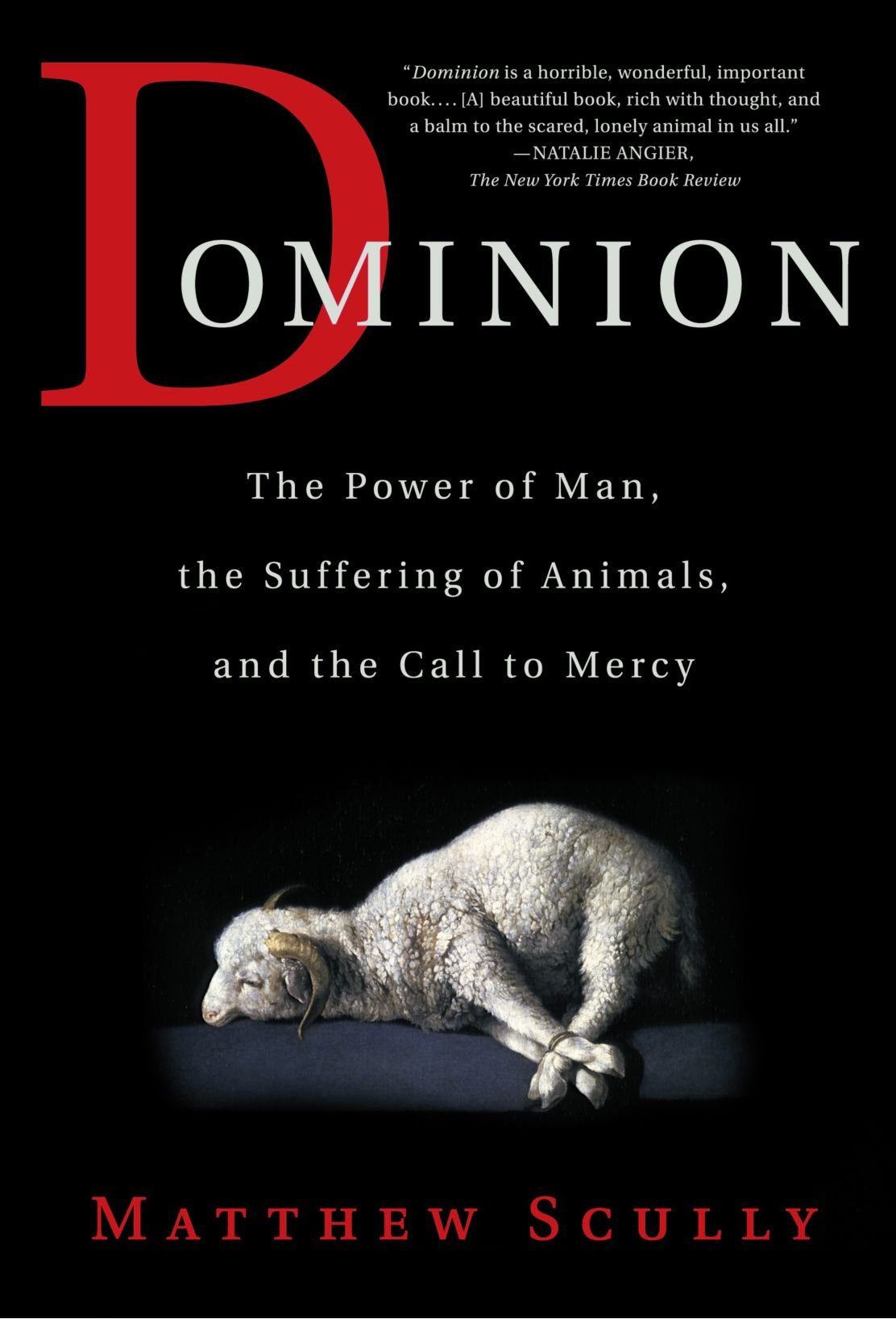 Another from my ongoing reading about morality and our treatment of animals, found in Matthew Scully’s Dominion. The quote is from Ecclesiastes 3:19-20, and perfectly captures the humility and sense of connection we need to see animals as worthy of moral consideration:

“For that which befalleth the sons of men befalleth beasts. Even one thing befalleth them: as the one dieth, so the other; yea, they have all one breath; so that a man hath no pre-eminence above a beast: for all is vanity. All go unto one place; all are of the dust, and all turn to dust again.“

That puts it in some perspective, no?

“The experiment, described Thursday in the journal Cell, involves injecting human stem cells into the embryo of a pig, then implanting the embryo in the uterus of a sow and allowing it to grow. After four weeks, the stem cells had developed into the precursors of various tissue types, including heart, liver and neurons, and a small fraction of the developing pig was made up of human cells.

The human-pig hybrid — dubbed a “chimera” for the mythical creature with a lion’s head, a goat’s body and a serpent’s tail — was “highly inefficient,” the researchers cautioned. But it’s the most successful human-animal chimera and a significant step toward the development of animal embryos with functioning human organs.”

If that sounds creepy to you that it is because it is creepy, very creepy. And I can only imagine what “highly inefficient” is a euphemism for. Yet again, we have a perfect example of technology rushing forward because it can, before the ethical implications can be well understood.

And yet again, it is human interests and needs, with no real consideration of the interests of the other species involved, that is the driving force:

“Researchers hope that one day doctors may be able to grow human tissue using chimera embryos in farm animals, making organs available for sick humans who might otherwise wait years for a transplant.”

Now imagine a factory farm of sows, all nurturing chimera fetuses which can be harvested for human organ transplants. When are the fetuses harvested? How? When and how are they euthanized or killed? What happens to the sows?

Not sure how many articles and books it is possible to write about how darn smart an octopus happens to be. But they keep coming. Which is fine, because maybe if we read enough about nonhuman intelligence we will stop being so arrogant about our own.

Here’s the latest, adapted from from Other Minds: The Octopus, the Sea and the Deep Origins of Consciousness, by Peter Godfrey-Smith.